Do you love the excitement of a rumbling engine combined with the spirit of competition? You are in luck America is full of Motorsports. But not all of these sports are for everyone and you might be struggling to find the one that you can really get into. Motocross racing has those tiny little bikes, like the one you just bought for your 4 year old, weak. Horsepower is where it is at, there are a few options for horsepower, you could go with Formula one but that is dominated by those fruity European dorks. Monster trucks are only cool when they are smashing things, so that doesn’t satisfy the competition factor.

What are you left with? The obvious answer is NASCAR, 725 horsepower rumbling around the track, beer everywhere, a virtual trailer park on the infield to make you feel at home, almost perfect. But there are some drawbacks to stock car racing, first of course, is the length, who has time for a 500 mile race? Where is the excitement, boil it down to the crashes and the win and maybe you could keep me interested, but not with all of the uneventful laps in the middle. Now the other big issue is all of the turns, who can keep track of where they are going? If you are one of those people who felt their intelligence was insulted when ventriloquist Jeff Dunham’s character “Bubba J” said that he felt NASCAR was “a sport that is easy to follow when you’re hammered” as if to imply that it was simple, you aren't alone. There are some of you out there who feel as though racing has gotten too complicated, with stages and cautions and points and turns and pit stops, (not to mention dozens of cars to follow) and you aren’t wrong, it has gotten too nuanced and intellectual.

So what is there that doesn’t involve all of those wild and wacky turns and stops, as well as not taking 5 hours to put up some sort of a result? Some might say drag racing, but anything that is over faster than your average 8 year old can chug a PBR (13.2 seconds according to research) is just a little too quick. Not to mention there are still two cars out there to keep track of, and they have those parachutes? What are those even for, they aren’t skydiving at all? So one at a time, horsepower, slow it down, where can you find all of that? Tractor pulling! The competition based around seeing how far some dude can drag something behind his vehicle. It has everything you need in a Motorsport, loud engines, the smell of diesel, and a crowd full of girls who know which quick-snack has the best price on Copenhagen. 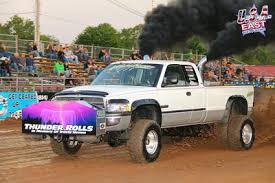 Developed by a crafty farmer who wanted to save face upon realizing he had pulled the hay wagon all the way out to the field after forgetting to put the front wheels back on, tractor pulling has been the official sport of Ohio’s intellectual elite since the mid 1900’s. The competition formed once a sled was standardized, and some fancy pants college boy engineered a mechanism to shift the weight and make it more difficult to pull as the distance increased. Immediately following its inception, the motto was “pull on Sunday, plow on Monday” with most of the tractors involved also being used for normal farm operations. Over time the tractors and trucks used in pulling evolved, multiple engines, massive turbos, cartoonish tires, completely impractical for farm work, but man can they drag some sh*t a long way.

Remember those guys from high school who somehow had five periods a day as a shop class and spent the other two in the back of the parking lot revving the engine on their P.O.S. 20 year old Chevy pickup? The best and brightest of those guys madetheir way into the Pro-Pulling circuit. Trading their (somehow always torn) Mossy oak ball-cap, flannel and ripped jeans in for a fire suit and HANS device (they get to keep the steel toes that they have worn nonstop since they were 12). Hopping in the rig to rip it up down the 330 foot dirt strip. As the ‘sport’ has grown and gained notoriety some associations like the “Lucas oil Pro Pulling league” have struck up TV deals with basic cable networks like the world famous “MAVTV” to bring the joy of pulling to the masses at home. (and let me tell you the mysterious exemption from those high school English classes shows up in the post-game interviews)

The nice real feel good side to the high stakes world of pulling is that you don’t need to be a professional with a 9000 Horsepower inter-cooled twin turbo behemoth (Ironically within a 1972 Allis-Chalmers frame) to participate. All you need is a weight to drag and a strip of dirt. Popular anywhere diesel is cheap and books are scarce, it is a competition that can be hosted with little infrastructure or organizational skill, leading to amateur pulls popping up all across the country almost every weekend. I wouldn’t advise showing up in a Prius but if you are craving the roar of an engine without the needless complexity of a race, or are just wondering who is buying all of the "Trump 2020" flags. I would advise finding yourself a local pull, filling the cooler with some Milwaukee’s Best, and enjoy watching some good ‘ole boys play in the dirt.