They Shot Big Papi, But They Killed Gloria

I don’t like writing about things that already have a lot of column inches allocated, but the US women don’t play until tomorrow, the US open hasn’t teed off at Pebble yet, and Cricket got rained out today.  With nothing else going on I thought I would put down some thoughts on the Stanley Cup Finals, it won’t be funny, it might not even be original, but I get the feeling Wednesday is going to be wild. Boston rallying back, and St. Louis fighting to hoist The Cup while Gloria plays for the first time ever.

I am not a Boston fan(nor are most outside of Boston,see above image), I do not want the bruins to win but if ever there was a lock, this is it.  Come Thursday you can trash me all you want if I end up being incorrect, but for now I am unhappily, but confidently, standing by the idea that there is a 100% chance Chara lifts the cup.  And I would also venture a strong guess that cup leaves The Garden and goes directly to the VIP room at Mass General Hospital, where by then the biggest name in Boston sports (other than maybe Brady) will be recuperating.  The question that has been going through my head throughout the playoffs was simply “how do you motivate a city that is on less than a 6 month championship drought?”  Especially when going up against a team that is in a position to win their first championship ever.  Well there have been some motivation cultivating moments and a building of that momentum in the latter half of this series.  Chara, coming back out with a broken jaw, the call in game 5 (I think it was a good no call, but I won't say that anywhere near The Olde Towne), and the St. Louis newspapers leaking premature victory headlines and national websites selling championship gear is enough to piss of any team. 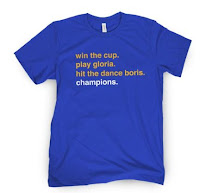 But you want to see a city rally, you need some tragedy, something to galvanize a group and give them something to overcome.  Sunday night some coward in the Dominican literally gut shot one of the most beloved faces in all of sports, Boston especially in the back.  (Even Yankee fans let their support show online, which is saying something)

For those of you who aren’t yet aware, at a bar in the DR last night someone snuck up behind David Ortiz and put a bullet in his back.  His condition is reported to be stable now, and he is set to be brought to Boston for further treatment as soon as possible.  Oh, and he will be transported by a plane that the Red Sox are sending, how do you know you are a sports hero, your former team sends a freaking plane to help you out on a moment’s notice.  Papi is a Boston Legend, and there is no way that he won’t be mentioned at Game 7, if not magically present and waving a flag.

The Garden hasn’t hosted a championship game 7 in over 30 years, and less than 10 times in history (Boston teams won all of those games, 2 over the St. Louis Hawks).  The Leafs learned earlier this year that you can push the B’s to the edge, but with 60 minutes to do or die at home, Boston shows up.  Game 6 saw some production from “The Perfection Line” and with more time those animals are just learning how to pick apart their opponents, and Gryz back on the ice the Bruins have things shifting in their favor from a purely hockey standpoint.  That combined with TD Garden being an electric factory (Gronk smashing things and Brady in an Ortiz jersey).  That guy may have shot Big Papi but he killed the Blues, put the Branigan back on the shelf for at least one more year, Bruins in 7.