on May 30, 2019
A sideways hat donning Ginger is Lighting it up, further proving that Cricket is a joke.  Because you definitely missed it, here is a quick update, written by me, based on my knowledge of the sport:

In just the first of the 2019 ICC Cricket world cup the left-handed English All-Rounder lit up the pitch scoring 89 runs and surviving more than 30 overs before finally being put out.  The highlight of his at bat of course being the full length on off stump to get to 50 runs in on the fifth bowl of Over 36.  A fast bowl low and on line to the wickets from specialist Bowler Imran Tahir, rather than golfing down for it and producing what would have likely been an easy catch out, or a short length for no runs he cleverly angled the bat and sent it nearly over his left shoulder for a full length FOUR. His personal Run Rate nearly outpacing that of the entire South African team.  At press time the RSA team has produced 10/1 in 8 overs for an RR over 1.1 less than the England team.

Now if that all sounded like marble mouthed boring shenanigans, you aren’t alone.  The rest of the sane world doesn’t know either.  That is why I have dove into the trenches for you and learned just enough about this miserable game to fully grasp the depths of its stupidity.  And this morning has not disappointed, what should be an impressive performance just shows why this game has no place in the world.  THIS GUY: 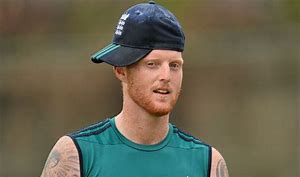 Is out there looking like a stud.  Now before I go too deep on bashing Red-heads remember Tormund Giantsbane was my vote for the Iron Throne (RIP).  There is just something about someone who looks like he should spend most of his time running from the sun like a guy on Cops who “just doesn’t like police” being a premier athlete that doesn’t add up for me. Before you say it, Andy Dalton doesn’t count, his complexion matches the uniform and that for some reason makes sense to me. I guess if it takes a goofy looking ginger for England to feel like they still have some dominance over a field of teams that is basically just former colonies they lost so be it. Some people do drugs, some people watch cricket, wouldn’t surprise me if most did both. These people aren’t difficult to impress, they thought Pippa Middleton had a nice “bum.”
Ben Stokes cricket England South Africa Sports WICKETS World Cup 2019